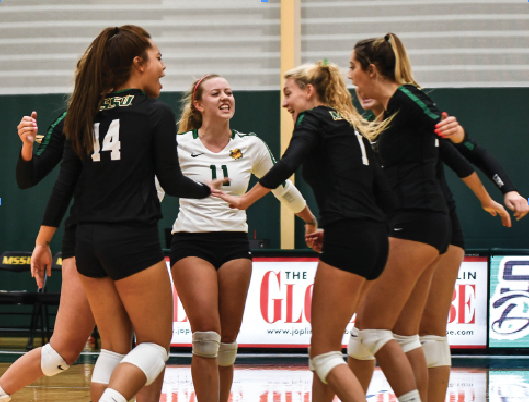 Lions celebrating after scoring a point against Cameron University on Sept. 7

The Missouri Southern volleyball team hosted the Holiday Inn and Comfort Suites Southern Invitational over the weekend. The Lions picked up three wins and one loss in the tournament.

“I was very proud of how well we played for each other throughout the weekend. We adapted well late in sets and worked hard no matter what,” said Head Coach Kalie Mader.

“The team is very proud of their hard work but is also very excited to take on the next week of challenges,” said coach Mader.

On Tuesday evening, The Lions picked up their fourth win of the season against the visiting Drury Panthers. Another match took five sets to determine a victor, and Missouri Southern prevailed with set scores being 13-25, 25-15, 21-25, 25-22, and 18-16.

This is the Lions’ best start to the season since 2010, and have already have won more games this year than in 2019 where the Lions only won three games. The Lions will look to improve on their 4-1 start as they the regular season continues.