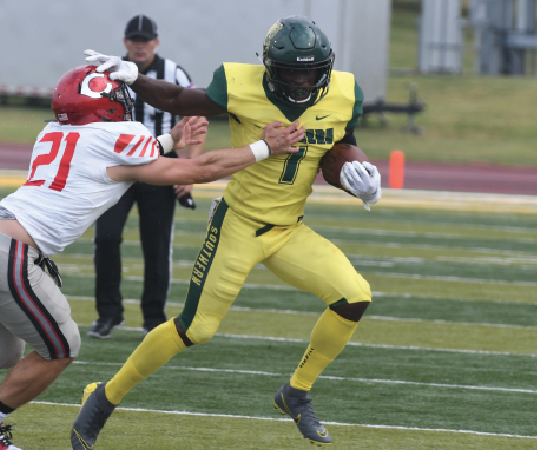 Charles West breaking a tackle against the University of Central Missouri on Oct. 5

The Lions hosted Washburn University last week in a 49-19 loss. The Lions had a slow start giving up 21 straight points in the first quarter before being able to cut the score in half to 14 to 28 before halftime. The Lions then cut the lead to only nine points in the third quarter, but were unable to score in the fourth as the Ichabods put up another 21-point quarter to win the game.

The Lions leading rusher against the Ichabods was senior Charles West who had 42 yards rushing averaging 3.5 yards per attempt. Senior Jacob Park would have the Lions only rushing touchdown while also throwing for 415 yards and a touchdown to senior Benjamin Phillips.

On the defensive side, the Lions had a record breaking game from sophomore Richard Jordan Jr., who beat his fathers record single-game tackle record with 25 tackles against the Ichabods.

The Lions are now on a five-game losing streak in which the Lions have given up more than 40 points in each of those games.

“The way it looks right now is that we are playing very poorly on defense and the reason why we have given up explosive plays that have turned into touchdowns is because we have had assignment errors,” said defensive coordinator Josh Hager. “We were able to force them to drive down the field, so we have improved there, but we weren’t able to make the most of of our opportunities dropping a few interceptions.

Losing is something that first year head coach Jeff Sims isn’t used to as he came from a Junior College National Championship in 2018. The Lions decided to shake thing up as they prepare for the last stretch of the season.

“There are benefits of being one and six. We don’t have the luxury of going to a bowl game,” said Sims. “When you are in contention there are certain things you are unwilling to try because you don’t want to break any momentum. One and six allows us to try different things in practice and some things we wanted to try in previous seasons.

Some of the changes Sims is implementing into practice will be when he does team and individual drills. Most college football teams do individual drills first to get critique technique first to prepare for team drills, but Sims is switching that. Sims believes this may help in preparing against other teams that way they aren’t tired from individual drills and can focus on technique later.

The Lions will face the Northeastern State Riverhawks this week, who haven’t won a game this season. The Riverhawks have only managed to score over 20 points once this season and with the Lions defense struggling to stop offenses it could be an interesting matchup.

“We believe every game is an opportunity to get better and have a break out game,” said Hager.

The Riverhawks ,on average, are giving up 54.14 points while only averaging 11.29 points themselves. The Riverhawks are also giving up nearly 10 yards per pass, so Park could have a big game for the Lions who leads the MIAA in passing yards.