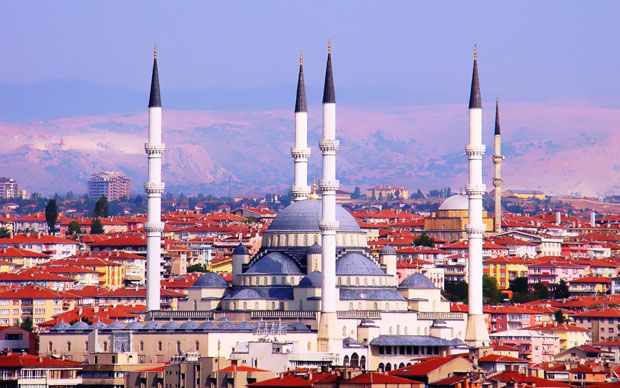 The Kocatepe Mosque is the largest mosque in Ankara, the capital of Turkey. It was built between 1967 and 1987 in the Kocatepe quarter in Kızılay, and its size and prominent situation have made it a landmark that can be seen from almost anywhere in central Ankara.http://www.beautifulmosque.com/kocatepe-mosque-in-ankara-turkey/

Next on the schedule for the themed semester’s exploration of Turkey will be a presentation by Dr. Conrad Gubera, professor of sociology and international studies at Missouri Southern. ‘The Mosque Next Door: A Traditional Religious Icon in a Modern Secular Culture’ explores the ways that religion has changed in Turkey from the early days of Christianity to the Turkey of today, which is home to 80,000 registered mosques and a population that is 99.8% Muslim.

The presentation will be held at 1 p.m., Wednesday, Sept. 24, 2014, in Corley Auditorium. Gubera will explain how the purpose and function of many of the world’s most beautiful mosques have changed since the end of World War I. The modern government of Turkey has taken over responsibility for regulating the operation of the country’s mosques.

“In traditional Islam, the mosque is everything,” said Gubera. “It served as the mainstay of the community … in the traditional mosque, you not only have religious service, but you’d also have a medical clinic. You would have (a qadi) — a judge, like municipal court in one area of the mosque. You would have a food pantry. In other areas you would have a motel or shelter for people who were in transit from one place to another, and always a school (a madrasa) and so really this had the function of a community … you not only went to church there but you could also get your needs met.”