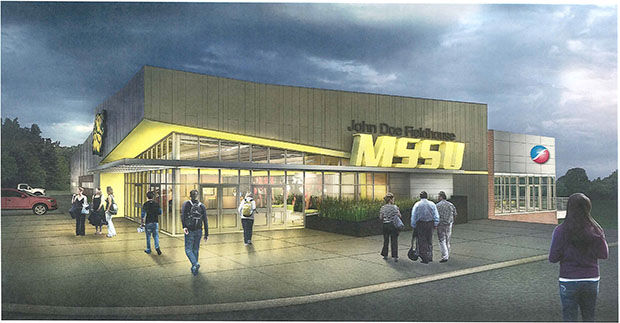 A computer generated rendering shows the new multi-purpose fieldhouse which is being built on the north end zone of the football field. The building will overlook the field.

Yet another step in the process for Missouri Southern on the way to a finished project many years in the making has been taken.

The University held a progress report last Thursday afternoon outlining the timetable for the completion of the new fieldhouse located at the north end of Fred G. Hughes Stadium, which is set to cost an estimated $9 million.

Opening in the summer of 2015 the fieldhouse will contain state of the art locker rooms for multiple sports such as football, baseball and softball. Along with locker rooms the facility will contain a 4,000 square-foot athletic training and video room, coaches offices, whirlpools, exam room and eight meeting/video rooms.

For spectators the facility will sport an events room that will seat 80 people with a full kitchen, an area that will be used for pregame meals for athletes, Lion Pride Luncheons, recruiting events and post game events for alumni.

“I think this is a game-changer for us,” said Jared Bruggeman (Missouri Southern athletic director). “It shows we’re really trying to invest in our programs.”

A sign that is significant in the eyes of many on the Southern campus, as emphasized by Head Football Coach Daryl Daye during his time at the podium.

“The future is looking bright,” said Daye. “I hope all of you feel the same way.”

He acknowledged the advantages that it will bring in the recruiting avenue but while the facility is based in athletics the fieldhouse will be constructed with an academic emphasis at its core.

“Not only will we be able to house our football, baseball and softball teams,” said Bruggeman. “We will have one of, if not the best, athletic training and strength and conditioning facilities in all of Division II. It will serve our student-athletes in more ways than that … it will also host a state-of-the art academic study room that can be utilized by every student-athlete.”

Following substantial donations by the Robert W. Plaster Foundation construction by R.E. Smith began on the facility earlier this year and continues to move forward in conjunction with the original timetable.