Honor 9/11 victims through acts of kindness 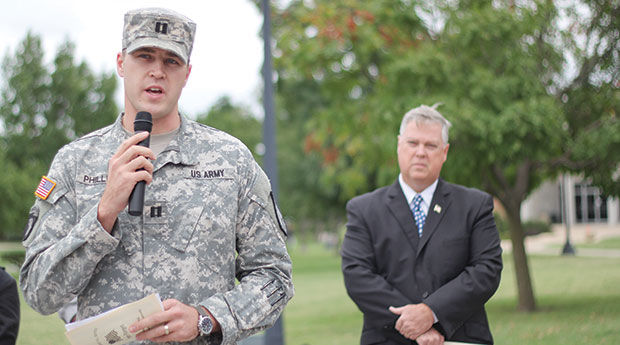 This week marks the 13th anniversary of the 9/11 attacks on the World Trade Center. Every year when this day comes around and I remember its significance, I can’t help but think back to where I was when I learned that such a massive and brutal attack had taken place.

I was in fifth grade, and I remember a peculiar tension in the air as we returned to the school from a half-day field trip to Greenbush.

The teachers were constantly going in and out of each other’s classrooms, whispering, with concerned looks on their faces. Students were being pulled out of school early. As a 10-year-old, I couldn’t have imagined the gravity of the situation that was causing such confusion and fear.

My mother picked me up from school at the regular time, and when I got in the car, she told my brother and me that something bad had happened.

She said terrorists had hijacked planes and flown them into the Twin Towers in New York City.

I began to cry, not really understanding what a terrorist was or why they would do such a thing, but feeling very sorry for those who lost loved ones and were dealing with the destruction and chaos of the situation.

Like many others, we went to the gas station and waited in line to fill the car with gas for reasons I couldn’t quite understand. When we got home, I was glued to the TV, tears in my eyes and knots in my tummy. Why would anyone do such a thing? It’s a question that haunts me to this day.

Bad things happen. As I’ve gotten older, I’ve had to come to terms with this reality. There often isn’t a reason for it, but bad things always have and always will happen, to good and bad people alike. We can mourn. We can be angry. We can send our men, maybe to their deaths, to fight for what’s right.

But ultimately, I believe, the only thing we can do to counteract such evil is to be a source of good. We can use these amazing brains we’re so lucky to have to create beauty, whether it be art, new technology, medical cures or moving literature.

We can treat those around us with kindness and love, despite our differences, and only hope that they will do the same.

We can’t remove all the evil or hurt in this world, but we can combat it with love.