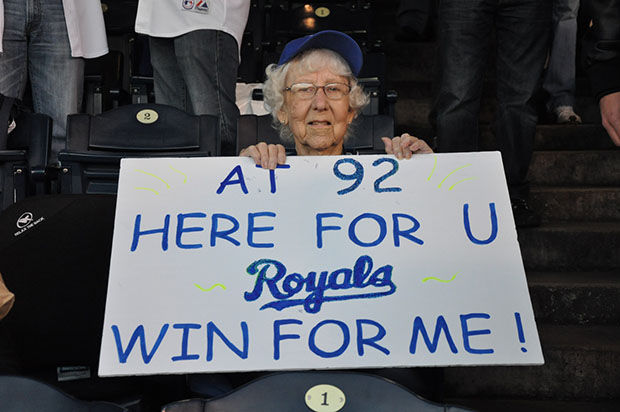 Kansas City, Mo.–This year’s World Series has brought excitement to people of all ages. And one of those people is 92-year-old Lorraine Hawkins, of Joplin.

Hawkins was just one of the many fans to make the long trek to Kauffman Stadium this postseason. She, along with her son, daughter-in-law and great-grandchild, came to game six on Tuesday, Oct. 28, to watch the Kansas City Royals take on the San Francisco Giants.

Of the Royals three World Series appearances; this was the first she has ever attended. Hawkins has been a resident of Joplin since her husband retired from his job, in Diamond Mo., 12 years ago. Mrs. Hawkins also works at the Women’s Missionary Union House at Forest Park Baptist Church on Rangeline Road in Joplin where she and her family attend church most Sundays. All in all it was a great night for this Joplin native as the Royals defeated the Giants 10-0.

The Royals lost the World Series Three Games to Four, after an amazing season put together by a very young group of guys.