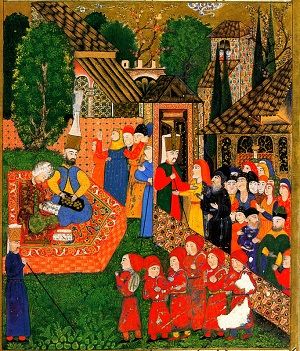 Janissary Recruitment, Balkans (Süleymanname). This scene depicts the “levying of children” or devşirme process used to recruit non-Muslim boys for service in the Ottoman army and bureacracy. The boys dessed in red will become part of the Janissary class of elite slave state personnel and soldiers (kapıkulu). While some Christian families sought to have their children placed in the devşirme because of the power and opportunities enjoyed by these kapıkulus, in this image we see mothers asking about their boys and expressing their distress over their conscription. The boys are registered by the devşirme officer and alotted a certian amount of money for travel expenses. On their backs, the boys carry small packs filled with their possessions for the long journey to the capital. Once they arrive, they will be circumcised and commence training for different administrative and military posts. They are dressed in red in order to be easily identified should they escape. As the accompanying text indicates, boys could only be taken from families with more than one son. The boys were chosen on the basis of their intelligence and physical appearance and beauty, with ugly boys and orphans being deemed unfit for state service.