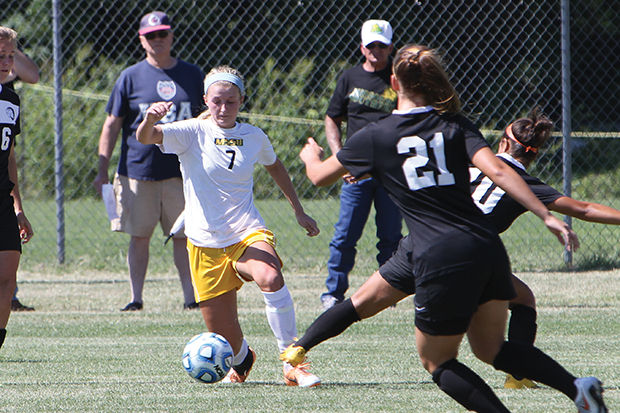 Freshman forward Hannah Bomar makes a move during the Lions contest on Sept. 14, 2014, against East Central that ended in a 3-3 tie after two overtimes. Bomar leads the Lions in assists with three and sits second in goals with another three.

The Missouri Southern Lions picked up their third win of the season Sept. 25 against the visiting University of Nebraska-Kearney, defeating the Lopers 2-0 at Hal Bolden Field.

Two days later, the Lions dropped their fourth game of the year in heartbreaking fashion as they fell to Fort Hays State 1-0, bringing their current record to 3-4-1 on the season.

“I’m upset about the loss,” said assistant coach Chris Leshinski. “We had our opportunities, and we need to work on finishing those chances against good teams if we want to be playing deep into November.”

The Lions looked strong in their win against UNK, as freshman midfielder Aubrey Lindsey scored her second goal of the season and junior midfielder Kayla Gajewski netted her first. Meanwhile senior goalkeeper Beth Hammons had her second shutout of the year.

“Thursday night’s game [Nebraska-Kearney] was great for us,” said senior midfielder Kelsey Haist. “It was a good win to walk away with, and we needed that. We got back on track and played well together, and it was a good, hard fought team win.”

The loss at home to the Tigers could have just as easily been a win for the Lions as they had 12 shots on goal, led by freshman forward Hannah Bomar and freshman midfielder Taylor Beck, but failed to convert on the shots.

“Yesterday was really disappointing,” said Bomar. “We worked hard and should have won that game. We have to finish the opportunities we have and can’t give up corners. We just need to keep working hard for each other, and our time will come.”

The lone goal surrendered during the two-game stretch came off a header that got by Hammons.

It was delivered off a corner kick. Goals off of set pieces are something the Lions have struggled with all season, according to the goalie.

“The majority of the goals against [us] have come off of set pieces, and that is something we will continue to improve upon, but in the grand scheme of things is not a big issue to fix,” she said. “We were obviously not happy with the outcome of the game. That is difficult as a goalkeeper to stay positive when you play so well and it still doesn’t go so well, but as a team we had the opportunities, we played together as a team, we worked hard the entire 90 minutes. It is a hard loss to take, but I don’t think there is much that needs to be changed.”

The Lions take the field tomorrow at 11 a.m. at Hal Bodon Field against the Bearcats of Northwest Missouri State.