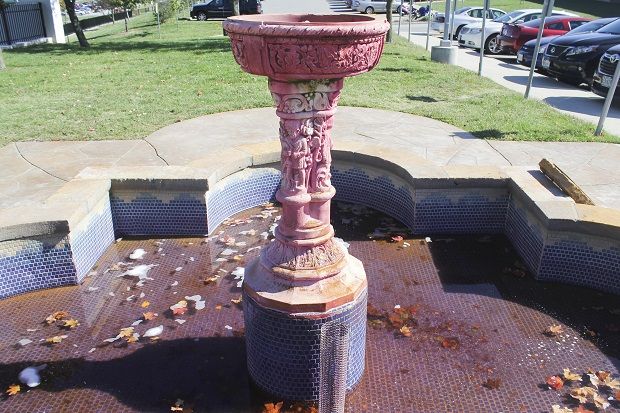 Students passing in front of the Ralph L. Gray Alumni Center at Missouri Southern may have seen something out of the ordinary on Thursday morning, as the Dennis Weaver Memorial Fountain located to the north of the building was dyed a bright red sometime between Wednesday night and Thursday morning.

Ground’s Supervisor Steve Jordon is concerned about the fountain and doesn’t believe that the stained surface will be easy to clean without causing damage.

“I will probably check with our custodial supervisor to see what chemicals we can use without having an effect on the art work,” said Jordon.

University police do not have a suspect at this time, but police officer Brian Moorhouse suggested that it could have been related to the upcoming football game between Southern and Pittsburg State.

“When I was talking to Meagan [Adams] over at the Alumni Center, she did say that there was possibly some (sic) tweets saying that Pitt State students were hoping that we were enjoying the red fountain,” said Moorhouse.

University Police Chief Ken Kennedy said that he had received word of the possible tweets, but was unable to find anything upon investigation of the claim. The act was captured on video, however.

“We have video footage, but it isn’t clear enough to determine the identity of the suspect,” said Kennedy.

While the individual might have been indiscernible in the video, the University police do have a vehicle description.

Throughout the day, a number of Southern students took to Twitter to accuse Southern’s biggest rival, Pittsburg State.

“Someone put red dye in the Mansion’s fountain. Personally, I think it has Pitt State written all over it… #MSSU,” said Danielle Campbell, junior biology major via Twitter.

Southern football players also jumped into the mix; some of whom called for payback.

“The real question is do we have enough school spirit to get Pitt back?! Everyone [is] tweeting about it,” said wide receiver Josh Jones via Twitter.