Volleyball ready to get back into action 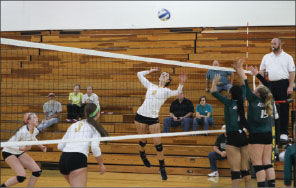 Senior outside hitter Katie Politte goes up for an attempted kill against Northwest Missouri on Sept. 27, 2014. She leads the Lions with 183 on the season.

The Lions hit the road again last weekend to take on conference opponents Emporia State and No. 7 ranked Nebraska-

For the Lions, it was an uphill battle throughout the first set after Emporia had match point four different times.

The Lions would win a thrilling opening set 29-27. The second set was nearly the same, with the Lions trailing early in the match. The Lions broke a 15-15 tie and never looked back, winning the second set 25-21. As for the remaining three sets, the Lions would go on to lose in a crushing defeat that saw them let a two-set lead slip away.

Emporia trailed at 1-0 in the third set but never trailed the remainder of the third and fourth sets, forcing a winner-take-all fifth set.

The Lions led 10-8 in the fifth set, but Emporia dazzled with a 7-1 run and escaped their home floor with a come-from-behind win.

“To be honest with you, I’m not really sure how we came up short against Emporia,” said Krishna Merriman. “I’m not sure as to what happened.”

“We became a little tense once Emporia started to figure us out,” said senior Katie Politte.

Politte had match high with 17 kills and led the Lions attack that saw three Lions in double figures for kills. Politte added 17 digs for a double-double, while Callie Whetstone had 13 kills and eight blocks. Merriman scored 13 kills, 20 digs and six blocks. Katie Wiele and Cheyanne Crandall had 23 and 16 digs, respectively.

A tough loss it was for the Lions, as it seemed to carry over to the following day matchup against the Ichabods of Washburn. At the hands of Washburn, the Lions were swept and done away with quite easily.

The Lions return home for the weekend and take on Central Missouri today in Young Gymnasium.

Against Central Missouri, the Lions look to “keep calm and play ball,” said Politte. “Our main focus this week will be learning to adjust midgame instead of hitting the same shots.”

As for Merriman, the message is very clear against Central Missouri and Lindewood this upcoming weekend.