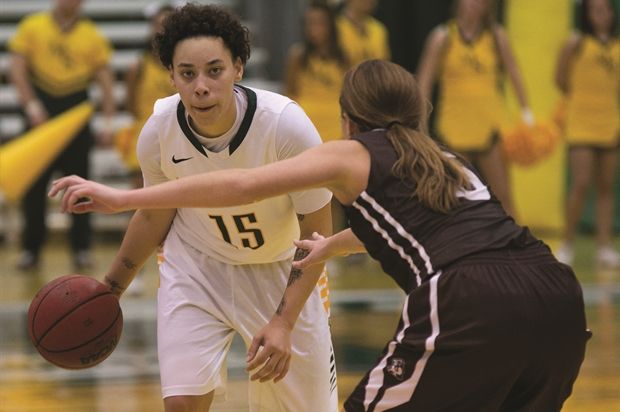 Lex Fitzpatrick brings the ball down the court for Southern as she is guarded by Maggie Cunningham of Quincy Nov. 22 in the Leggett & Platt Athletic Center.

After winning both of their matchups in the 2014 Fairfield Inn/Pizza Hut Classic, the women’s basketball team were back in action against Avila and Quincy inside the Leggett & Platt Athletic Center.

It was an exhibition game for Avila. As for the Lions, it was pedal to the floor from tip-off to the final buzzer.

Four different players scored in double figures for the Lions, led by Sharese Jones with 13 points — who also added four boards. Senior Jolee Sharp shot 4-5 from behind the arc and scored 12 points, while Shawnee Phillips contributed with 11 points and Nicole Hartzog scored ten.

“I just felt like our defense was going to dictate the outcome of the game,” said head coach Ronda Hubbard. “Up to this point, particularly in the Avila game, our defense has gotten better each game we’ve played.”

Next for the Lions was the visiting Quincy Hawks — the NCAA tournament team last season. This would prove to be a tough early season clash for the Lions.

“On paper most people may have thought Quincy was better than us,” said Hubbard.

Luckily for the Lions, the game isn’t played on paper, but on a court. The Lions led 25-21 going into half — the smallest halftime lead for the Lions this season. Quincy went on a 10-2 run to start the second half. Quincy would get their last lead at 32-31.

After a 6-0 run from the Lions, they never looked back. They stretched the lead to eight with under two minutes left. From there, the Lions sealed the victory and won the early season battle 56-49. The Lions start the season 4-0.

Hartzog finished with 17 points, Jones 14, and Phillips added 10. Jones recored her second double-double of the young season with 10 rebounds, while Hartzog pulled down seven.

The Lions look to stay focus and hot as conference play is looming right around the corner.

“We want to stay focus on us,” said Jones. “Focusing on our strengths and improving on our weaknesses in practice.”

“It was a real good test for us early in the year. We were not only able to play them well, but be able to beat them,” said Hubbard.

Next up for the Lions is a showdown with Northwestern Oklahoma tomorrow. Tip-off is slated for 1 p.m.