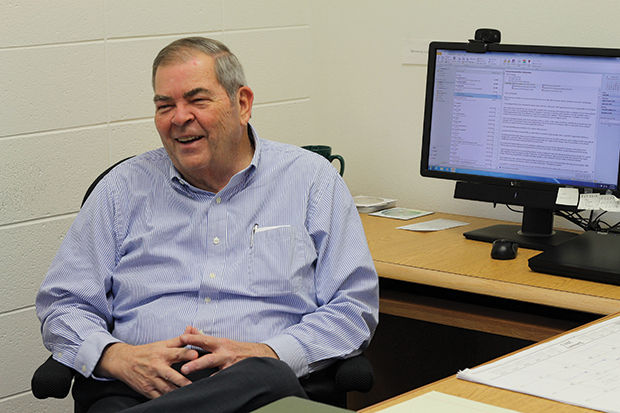 John Tiede, interim vice president of development and director of the Missouri Southern Foundation, talks about his past at Missouri Southern and his goals in his new position while in his office on Thursday, January 15.

Dr. John Tiede has been appointed interim director of the Missouri Southern Foundation and vice president of development at Missouri Southern. JoAnn Graffam, who formerly held the permanent position, left in December 2014 to explore other opportunities, said Tiede.

He soon came back to spend nine years working as part of the Missouri Southern Foundation before retiring once more in 2010. Since then, he has spent the last few years working with the foundation as a consultant.

“So it wasn’t like I hadn’t had any exposure for five years,” he said.

As interim director of the foundation, Tiede will carry out the same responsibilities as his predecessor, Graffam.

“We look after all the gifts and the processing and solicitations of gifts,” said Tiede.

In addition to the development office’s fundraising efforts for the new field house, baseball stadium and Reynolds Hall renovations, Tiede has two goals in mind for his time back on campus.

“One, I would like to try to do maybe a better job of coordinating all the solicitations [of gifts] across campus.”

Tiede said he would like to increase communication between those working toward potential donations.

“You know, the worst thing that could happen is you end up on the same donor’s doorstep, three of you, in a week or something like that,” he said.

Second, Tiede said he wants to establish some short-term goals for the staff to accomplish this semester.

Although Tiede said he doesn’t know how long he will serve as interim before the position is permanently filled, he suspects he’ll be here on campus for around three months.