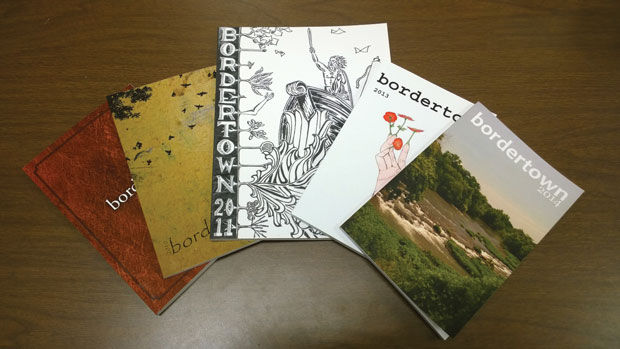 The submission deadline for Bordertown, the annual literary magazine is approaching and editors encourage Southern students to submit their work for publication. Submit work to Joey Brown via email or hardcopy no later than Feb. 23.

Students can submit works for only two of the publication’s three literary categories: poetry, prose (fiction or creative non-fiction) or one-act plays. Up to six poems can be submitted in the poetry category, and up to 2000 words per person spread over a maximum of three separate works can be submitted for the prose category.

According to Brown, once the entries start to come in, a staff of dedicated student volunteers weed through the submissions and begin picking pieces to be published. In order to maintain entrant anonymity, submitted works must not contain the writer’s name on the entries, but instead include the name on a cover page to be sent with the entry.

Though the number of entries varies from year to year, Brown says they typically recieve at least 100-120 entries for each issue.

“Since I’ve been here, I’ve had years where we’ve gotten well over 250 submssions,” said Brown, “and then, some years, we’ve gotten considerably fewer.”

Despite the triple-digit entry numbers, Brown still encourages more students to submit their works each year.

“It is much, much harder after you leave college to find these kinds of opportunities, and here we [the Bordertown staff] are, sitting and waiting for interested students to send us their stuff,” said Brown. “Take a chance.”

Bordertown was originally created in 1971 as The Winged Lion. Up until the early 2000s, when the rebranding occured, the publication collaborated with Southern’s Art Department and included art categories as well as literary categories.

“We stopped doing that for a lot of reasons — one, because we wanted to distinguish our journal as a literary journal,” said Brown. “And somewhere in the 90s, most literary journals put less and less emphasis on including artwork to make more room for literature, to make room for the writers to get a chance to get their stuff published.”

Free issues of Bordertown will be printed and distributed later this year. For more information, contact Brown at 417-625-9708.