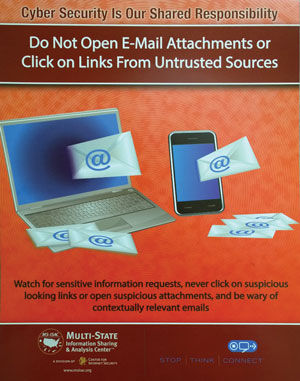 Students and faculty alike found their email accounts victim to a series of malware emails last week after the spread of the most recent mutation of the upatre computer virus made its way to Missouri Southern.

Inboxes and spam folders were bombarded with emails from various other students and faculty members, all with the subject line “You have received a new fa” and a “fax message” email attachment.

According to Albert Stadler, chief information officer of information technology, the reason the virus spread through Missouri Southern is because of the number of people who actually clicked on the attachment.

The upatre virus, which he confirmed originated off campus, operates by attaching itself to people’s email accounts and sending out mass emails to everyone in a person’s address book after the attachment in the initial email has been opened.

Though the virus is primarily just a nuisance that fills up email accounts with spam, says Stadler, the virus is capable of automatically downloading secondary viruses that can cause damage. Since being notified of its presence, Southern’s IT Department has worked to eradicate the virus from campus.

“We worked with Microsoft and some other virus companies by turning the virus in so that definitions get put out a little faster,” said Stadler. “We are making sure that if people have clicked on the link, that we’re following up with them and doing some cleanup work that way — making sure the viruses have been removed off the PCs.”

In addition to the cleanup effort, IT is changing passwords on faculty and staff computers as a precaution. To help combat computer viruses, IT recommends students and faculty members be suspicious of attachments, grammar or spelling mistakes, emails requiring immediate action or that create a sense of urgency, and emails addressed to “Dear Customer.” IT also states that students and faculty should not click on suspicious links, but rather copy the URL from the email and type it into the browser destination, and to also call the email contact anytime a suspicious email is received from a known associate.