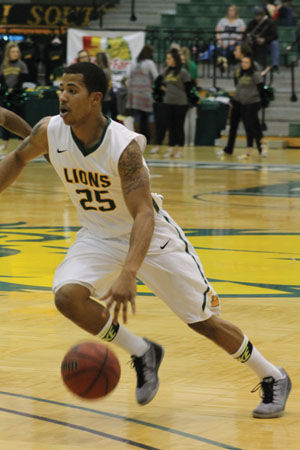 This contest showed what the Lions are capable of when they click on all cylinders, looking nearly unstoppable throughout the opening half, taking a 41-28 advantage into the locker room.

The second half would prove to be a bit of a different story as Lindenwood made their runs, closing to within 10 on multiple occasions, but as the clock wound down, Southern leaned on the players who have led the way all season, senior Lane Barlow and junior Taevaunn Prince.

Once again, the dynamic duo did not disappoint, with Prince leading all scorers with 27 points, adding 11 rebounds to secure his eight double-double of the season.

Not to be outdone, Barlow, a Chicago native, did his best to honor Derrick Rose by shellacking the stat book on the way to one of his better games of the season. He put up 13 points, 10 rebounds and a career-high 11 assists on the night, grabbing the first triple-double of his career.

Now the Lions prepare for the final game of the regular season tomorrow night, here on their home floor. It’s a night to pay homage to the hard work from a class of seniors, and also another game to build momentum toward the all important MIAA Tournament, a tournament the Lions must win if they want a chance to make it to the dance.

“These games have been huge for us,” said Prince, “and it definitely gives us the confidence and momentum going into the tournament. We are playing desperate, with a sense of urgency.”

The Lions tip off the final home game against Lincoln, the team residing at the bottom of the conference rankings. The game could serve as the perfect warm-up for tourney time.