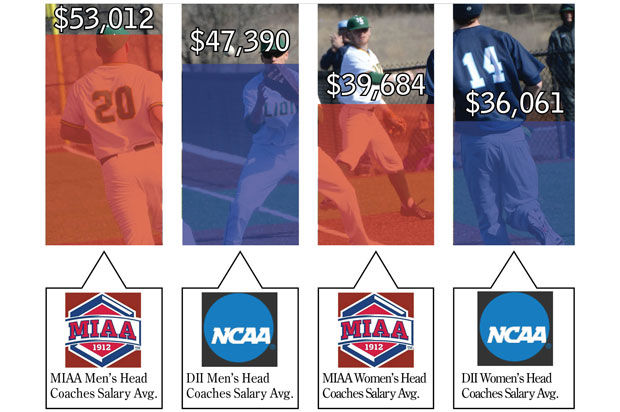 Infographic by John Davidson | The Chart

The numbers presented are figures for 2013 — the last data set made available by the U.S. Department of Education. The category of men’s coaches is representative of coaches of men's athletics, not necessarily male coaches. The same applies for the women's head coaching average — the data is representative of coaches of women's athletics, male or female.

Athletics play a fundamental part on most any college campus. Missouri Southern is no different, featuring four men’s teams and five women’s teams that compete in Division II athletics.

The MIAA conference, which Southern competes in, includes 14 teams across four states: Kansas, Missouri, Nebraska and Oklahoma. While the universities differ in which sports they compete in, each competes in athletics at the DII level in some capacity.

With sports come costs, and the MIAA is represented by a wide range of average head coaching salaries. Yearly comprehensive data released by the U.S. Department of Education shows the amount of money programs spend on athletics, ranging from junior colleges to Division I programs.

The earning discrepancy between head coaches of men’s and women’s sports in the MIAA is on pace with that of that national average – coaches of women’s sports earn about 75 percent on average of what men’s coaches earn in the conference, while the national percentage for DII is about 76.

In 2013, Southern resided near the middle of the pack in the MIAA men’s head coaching salary rankings, with men’s sports coaches earning an average of $55,130. This total has climbed since 2013, and men’s coaches currently earn an average of $65,551.66. Assuming the rest of the conference had stayed at a flat rate since 2013, Southern would have vaulted from ninth in men’s sports head coaching salary to fourth.

The University of Central Oklahoma, who also happened to have the largest enrollment in the MIAA with 10,864 in 2013, paid the highest average men’s sports head coaching salaries at $74,624. Central Oklahoma also had the largest discrepancy between the two genders, with a pay gap of more than $32,000.

Head coaches of women’s sports at Southern didn’t fare as well as the coaches of the men’s teams, but still earned an average of $48,138 annually in 2013, the fourth highest average salary in the MIAA. The difference of $6,992 between the salaries of men’s and women’s head coaches was the second smallest margin in the conference following only the University of Nebraska-Kearney, where coaches of both genders only differed by about $2,600.

Editor’s Note: The data used in this article does not include any additional compensation earned through teaching; this is exclusively the salary earned for coaching. The data was the most recently provided by the U.S. Department of Education.