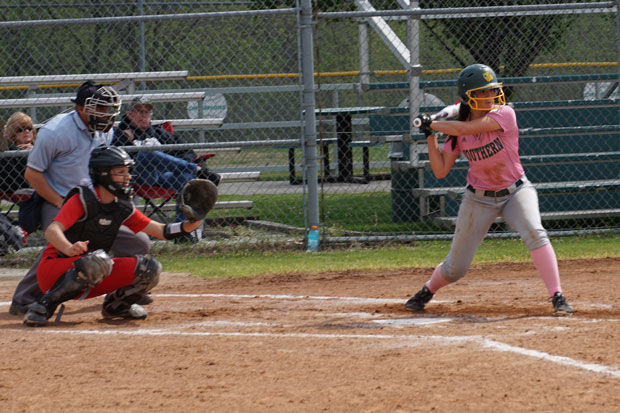 Senior Brooke Swadley gears up to swing at a pitch at the Pride4Pink game on April 21, 2015 against Central Missouri. Swadley, on the day, batted 2-5 with one RBI. The Lions were swept in the series. On the season, Swadley batted .276 with 14 RBIs and 17 runs scored. Swadley also had an fielding percentage of .936 committing 11 errors on the season.

Missouri Southern’s softball team was in action for its final 10 matchups of the season last week and this past Monday. The Lions would play six of their final 10 at home at Lea Kungle Field.

“We’re hoping to get a pair of wins and finish the season with a positive attitude,” said Sarah Williams.

First up would be a series with Rogers State of the Heartland Conference. Rogers State would take game one 5-1.

In game two, the Lions would make history.

The Lions put four runs on the board in the opening inning thanks to back-to-back home runs by Myranda Stewart and Kathryn Goins-Osburn. Stewart hit a three-run home run followed by a first pitch solo shot by Osburn.

RSU answered back with seven runs in the bottom half of the first inning.

The Lions were not fazed. The Lions responded with another four-run inning thanks to another back-to-back home run display. Osburn, for the second consecutive inning, hit another home run, this time a two-run shot. Williams had her follow-up with a solo shot over the center field wall.

Tied eight all in the top of the fourth inning, Stewart homered again to give the Lions a 9-8 lead. That was Stewart’s second homer of the game.

Tied nine all in the top of the fifth inning, Williams hit a leadoff solo home run to left field to give the Lions the 10-9 lead. That was William’s second home run of the game. The Lions would tack on two more runs and hold on for the, 12-9 victory.

On the day, Williams, Osburn, and Stewart all hit two home runs each, setting a Southern record for most home runs in a game. They accounted for 10 RBIs in game two (12 runs total).

The Lions would welcome the conference-leading Central Missouri Jennies to Lea Kungle Field for the Pride4Pink Game.

The Lions couldn’t hold on to their one-run lead in the top of the seventh inning as they gave up three runs, losing by a final score of, 6-4. The Lions committed three errors with two coming in the seventh. Game two was all Jennies as they shut out the Lions, 11-0.

On senior day, the Lions would welcome Northeastern to Lea Kungle Field. In game one, the Lions would take a 2-0 lead into the seventh inning as NSU rallied and scored three runs. The Lions answered back with a leadoff solo shot by Alana Hester to force extras. In the eighth inning, Ashley Lutz gave up the game-breaking home run which eventually led to the Lions losing 4-3. In the nightcap, the Lions won 4-2.

“It was nice to send them [seniors] off with a good memory of their last game on our home field,” said Williams.

Shelby Mitchell was the winning pitcher in game two as she finished the day with the win and an ERA of 0.00 and an opponent’s batting average of .091. Hodson had a no decision with an ERA of 1.11 and held the River Hawks to a .192 batting average.

For the final series of the season, the Lions travled to Jefferson City to take on Lincoln. In game one, Lions pitching gave up only three hits in route to a 5-1 victory.

In the final game of the season, the Lions made things interesting in the seventh as they led 5-2. Lincoln scored two runs off three hits and two Lions’ errors. The Lions would hold on for their third straight victory with a final score of, 5-4.

The Lions wrap up the season with a record of 15-37, 7-19 MIAA. It was relatively down season for the Lions but, “we did a good job of playing together and we know we’re better than our record shows,” said Osburn.

“The most memorable moment was when our team hit six home runs in one game against Rogers State. It was cool breaking a school record,” said Williams.