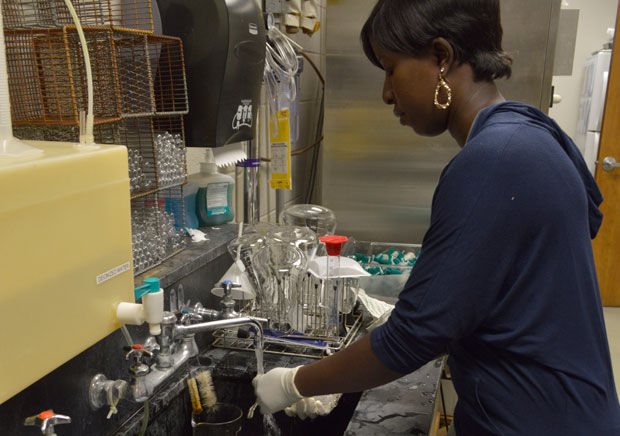 Haddy Faal, biology major, cleans test tubes April 30 in the microbiology lab prep room located in Reynolds Hall. After being held up in the Missouri Legislature for two and a half months, the bond measure that could appropriate $5.2 million to Missouri Southern to renovate science labs in Reynolds Hall was passed out of the House committee and is scheduled to be heard on the House floor May 4.

House Bill 19, a bond measure that will help provide funds for Missouri Southern’s planned renovation of Reynolds Hall, was voted out of committee by the Missouri House of Representatives April 29 and is expected to make its way to the House floor May 4. If passed, the bill will appropriate $5.2 million for Southern’s renovation effort, as well as nearly $320 million for other colleges and universities across the state.

“We are moving forward and will be working this weekend to remind House members of how important this funding is to higher education and the students we serve,” said University President Alan Marble upon hearing the news.

According to Marble, the bill, which made its way through the Senate in February, was held up in the Missouri Legislature for two months while the House debated over whether a bond measure was the best way to provide the funds. Despite the delay, Marble is confident that the bill will pass.

Another piece of legislation that could serve as a potential Plan B for the renovation effort has also been put into place. Should HB19 not pass, this backup plan would see Southern’s development office reaching out to financial donors in order to match a smaller amount of state funds.

In preparation for the renovation, Southern purchased 15 FEMA trailers formerly used by Joplin High School for $9,840 in February. Once the funding is secured, regardless of which legislation is used, these trailers will serve as temporary science labs for students in Reynolds Hall.

“We purchased the temporary labs based on all this,” said Marble. “We’re ready to roll.”

Go to www.thechartonline.com for continued updates.