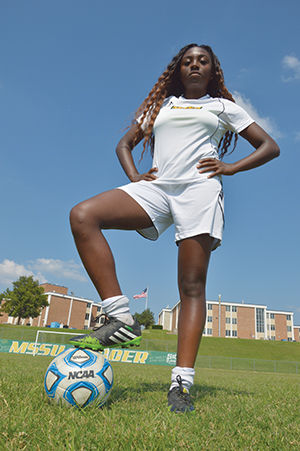 I asked “Ro” to guarantee one thing about the upcoming season, Ronise “Ro” Miller said, “I guarantee 11 wins.” If you have followed Missouri Southern soccer over the past two seasons, you already know this program has combined to win nine games during that span. Miller promises 11.

Talk about confidence. Miller has plenty of it. That confidence earned her a second team All-MIAA selection last season as a true freshman defender. Just imagine if she gained more confidence. She’d probably make the All-American team this season.

Now, originally she wanted to guarantee that the Lions get to the MIAA tournament. But that was too easy for her. She feels no pressure about backing those words up. She loves and just plain enjoys the game of soccer too much to feel pressure.

Miller hails from Cedar Hill, Texas, where at the age of 6 she had to choose which sport she wanted to play full time. She has no clue as to why she chose soccer at that age, but it’s a decision she’s glad she made.

“I love team sports because I feel like it’s a family thing,” said Miller. “But soccer is fun because you can run around, lose weight and take out your aggression when you’re having a hard week. It’s always just been really fun.”

In sports there’s always that one player who’ll do the dirty work, that one player who welcomes physicality and grind, that one player who doesn’t want to play the glamor position. Miller embodies that player. She has never really drawn big interest in playing forward or midfielder and racking up goals. She wants to bang bodies, get under your skin and be an anchor for her team. And that’s why she plays defender. Miller wants to keep goals from hitting the back of the net instead of kicking them in.

“Defense isn’t always the go-to position but I feel like someone has to do it,” Miller said. “And I feel like it’s a great position to play. Playing defense is such a different aspect in soccer. I get to body up somebody. It’s just fun.”

Sidney Leroux is Miller’s favorite female athlete. Leroux is a professional soccer player for the Western New York Flash in the National Women’s Soccer League. Leroux is also a part of the United States Women’s National Team. She’s helped the USWNT take home silver and most a recently a gold medal in the Olympics.

“That’s my girl,” Miller said. “Some people think that girls playing sports isn’t feminine and it’s too rough, but she’s the embodiment of feminism and shows you can be rough at the same time.”

Miller will be in the lineup tomorrow as the Lions take on Drury in Springfield, Mo.

They say everything is bigger in Texas.