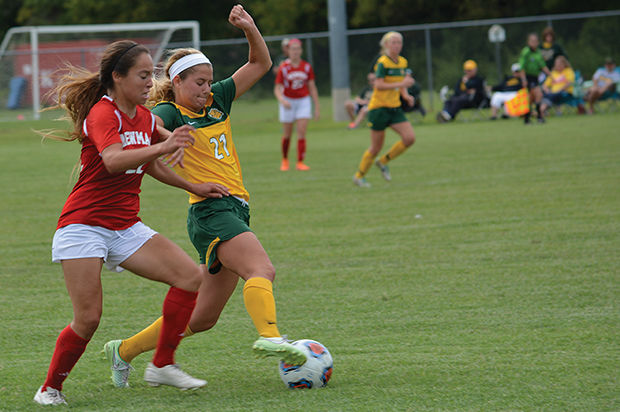 Senior Michaela Altvater shields off a Newman University defender in a home match-up against Newman at Hal Bodon field on Sept. 12, 2015. Altvater attempted one shot in the game and the Lions attempted 13 in total. The Lions survived two extra time periods before scoring the game-winning goal in the 107th minute.

The Missouri Southern soccer team was looking to bounce back this past weekend after dropping the first two games of the season.

The Lions are currently going through a patch of four consecutive home games, but that series may end tomorrow as Northeastern (Oklahoma) State comes to Hal Bodon field.

The Lions jumped out on Rodgers State early and fast as Karley Thomas scored in the fourth minute.

Just seconds later, Hannah Bomar cross-deflected off a Rodger State defender into the back of the net for an own goal. After an early 2-0 lead, the Lions wouldn’t look back. They tacked on four more goals.

Carly Cecil made it 3-0 Lions in the 32nd minute and Bomar scored in the 36th minute to make it 4-0. Rodgers State would score before the break and the Lions took a 4-1 lead into half.

Bailey North scorched a goal from 20 yards out in the 79th minute. Hannah Cook made her presence felt on the offensive end in the 81st minute when she put a goal in the back of the net. That made it 6-1, and that’s where it ended.

Six different Lions scored goals on the night, the most they’ve scored since 2012 against Lindenwood in a 6-3 victory.

Thomas led the Lions with five shots, two assists and one goal. Bomar recorded one assist and one score.

The Lions would need two extra periods to deny Newman a victory. The Lions and Newman were deadlocked at 0-0 after the first 105 minutes of action.

In the 107th minute, Cecil received a cross from Cook and took the game-winning shot from 20 yards out. The shot was redirected by a Newman defender into the back of the net for a game-winning goal.

The goal was Cecil’s second of the season, while the game-winning assist from Cook was her first of the season.

Southern held a 12-8 advantage in shots while both teams were even at 6-6 in shots on goal. Goalkeeper Phillips spent every minute behind the net to log her first shutout of the season and record six saves.

Southern will be back in action tomorrow against Northeastern (Oklahoma) State. Game time is set for 1 p.m.