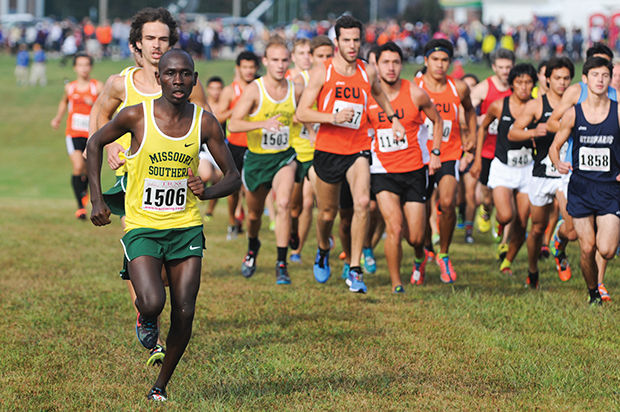 Missouri Southern's freshman phenom, Vincent Kiprop will attempt to become the first track athlete to ever win an individual NCAA Division II cross-country National Championship on Saturday.  Kiprop will be one of 25 runners competing and has been placed in the eighth and final group. Saturday's meet begins at 10 a.m. at the Tom Rutledge cross-country course.

Vincent Kiprop lasts words to his family were, “We’ll meet in the days to come. I can’t tell you when, but we shall meet,” said Kiprop. Those were the last words before he boarded a plane to Nairobi, the capital of Kenya.

There he stayed with his grandparents Cheres Chumo, Jucius Sigilai Chumo, and Grace Chumo before saying his final goodbyes and boarding the next plane out of Africa and to America.

Kiprop, a freshman nursing major, arrived at the Joplin airport and onto the Missouri Southern campus on Aug. 20, 2015, a Thursday he said he’ll never forget. Kiprop recalls feeling nostalgic because he felt he should be back home with his family. Jumping off the plane Kiprop couldn’t believe he’d made it here in America. Just being here in America, Kiprop noted that he didn’t feel like himself as he became more and more homesick.

“I was young and very small. People could see that I could not kick the ball very well,” said Kiprop. “And because of that, it made me have some interest in running.”

Kiprop’s father was a sprinter and only competed as high as the 1,500 meter race. As far back as Vincent can remember, he has always dealt with expectations of being like his father. Those were expectations Kiprop was willing to embrace but expectations that the freshman wanted to outperform. Thoughts that inspired his passion for running; Kiprop’s drive to be better than his father.

“Well if my dad used to do it, then I can do it better,” said Kiprop. “In Kenya, there’s a saying. The life that your father lived, you should not live like that, you should make yours better.”

And that’s exactly what Kiprop is setting out to do. Currently, Kiprop has won back-to-back individual races and is seeking a third straight victory at the NCAA Division II Championship hosted my Missouri Southern at the Tom Rutledge Cross Country Course.

Kiprop’s high school motive was, “nothing but the best.” If you talk to Kiprop you’ll notice he’s a very confident young man. When he steps out on a course he has one expectation, and that’s to win.

As a freshman, Kiprop has won three races this season (two at the Tom Rutledge Cross Country Course) and is the only Lion, male or female to qualify for nationals.

“It’s tough to say just how good Kiprop could be. The sky is the limit for him,” said Kiprop’s cross country head coach Bryan Schiding. “Kiprop came around the last 100 yards of the regional (2015 Central Regional Championship) and he looks at me and starts waving his index finger signaling he’s number one. I told him to get your hand down and finish the race. But that right there just speaks to his confidence as a young man and how he expects to win.”

Kiprop loves to celebrate prematurely. For him, celebrating is how he challenges everyone around him. Kiprop loves to be challenged. Waving his finger at his coach was letting Schiding know that the competitor behind him wasn’t going to catch him and that he was in position one -he was going to win that race. Every competitor wants to win and celebrate. When he celebrates he’s challenging the other competitors to beat him, so they can celebrate is how Kiprop sees it.

“Celebrating is just how we do. I wanted to do that for the big challenge next time (Division II Championship). I like celebrating in many ways. That’s how I wanted to celebrate that day,” said Kiprop.

“I believe in the power of winning. I know nationals will be challenging but I have to win. I have the confidence,” said Kiprop. “I’m here to win not to lose. People have done it before, why not me.”