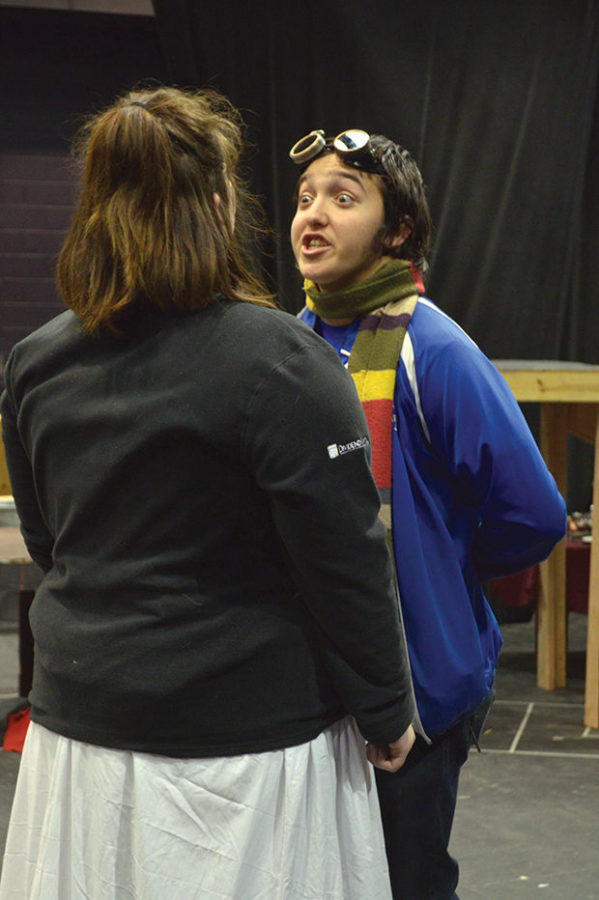 Joshua Lee Pruss (left) and Tonya Richardson (right) rehearse a scene from the upcoming production of The Threepenny Opera Feb. 24 in the Bud Walton Theatre. A collaboration between Missouri Southern’s music and theater departments, the opera will show March 1-5.

From March 1-5, the Bud Walton Theatre on campus will host “The Threepenny Opera.” The production is a collaboration between the music and theatre departments at Missouri Southern.

“The Threepenny Opera” proclaims itself “an opera for beggars,” and it was in fact an attempt to mock traditional opera to create a new kind of musical theater based mostly on the theories of poet-playwright Bertold Brecht.

Dr. Jim Lile, head of the theatre department at Southern will be directing the performance. Lile is very happy to introduce a new genre of epic theatre to the Southern community.

“Epic theater is a style that deliberately reveals the mechanics of the theatre to upset the expectations of the audience,” Lile explains. “The idea is that the audience should always be aware that they are watching a play.”

Lile also explained how in the late 1920s Brecht was a political playwright, therefore he believed that the audience should strictly be an observer.

Brecht wanted people to understand the arguments he was making rather than becoming emotionally involved with the characters of the play so they did not distort their vision or blur their understanding of things.

“Our production has a lot of humor to it.  But some of it is very serious,” said Lile. “Here’s a problem, we want you to understand it, because it needs addressing. There’s a lot of different musical styles, there’s a lot of things that kind of get poked fun at, but it’s all in an attempt to say here’s this scene and it reminds you of something else to get your attention.”

Summer Miller, a local community member and Southern alumna, is planning to attend the event one night.

“I have always been a fan and follower of the Theatre department, since I graduated with a music degree,” Miller says.  “The department is so talented this year and I have a feeling this production is not something a person would want to miss.”

All of that departmental talent does not come easy.

The group devotes themselves to five days a week of practice, with this week starting full technical, musical, and soon to be dress rehearsals.  All of this has been over a month’s long preparation for opening night on Tuesday, March 1st.