Southern is ready for the MIAA Championship 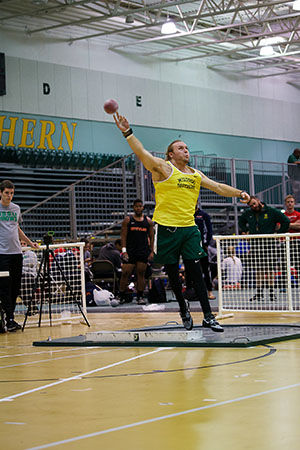 Senior Tyler Hovey throwing the shot put ball at the MSSU Lion Open inside the Leggett & Platt Athletic Center on Feb. 6, 2016. Hovey placed second in the event with a provisional mark and distance of 53-03.50. Hovey has had two top five performances in the shot put event this indoor season.

Both the nationally ranked women’s and men’s track and field teams competed in Central Missouri and Nebraska last weekend.

At Nebraska in the Nebraska Tune-up Emily Harris, senior, won the mile event. Harris beat out several Division I athletes, finishing in a time of 4:53.89. Harris has won all three mile events she’s competed in.

“Emily has had a rough go with back and hip surgery. We didn’t know where Emily would be coming off the injuries and if she could train through the season or not,” said Patty Vavra, assoc. professor and head of women’s track. “She’s been progressing so well. The effort it has taken [her] to get to this point has been giant. I’m really proud of the efforts she’s had this season.”

At UCM at the UCM Classic, Morgan claimed another school record. She did it this time with a distance of 19-02.5. It was good for a provisional distance and ranks ninth nationally and tops in the MIAA. Back-to-back weeks Morgan has broken school records.

For the men, senior standout Jayce Thomas won the men’s high jump with a provisional height of 6-11.00. That height ranks ninth nationally and tops in the MIAA this year. Thomas has won five different events over the course of the indoor season, while winning the high jump event twice.

Both the men’s and women’s teams like their chances in the MIAA Indoor Championships held in Pittsburg, Kan. kicking off today and ending on Sunday. This’ll be the fourth appearance in PSU for the Lions this indoor season. In PSU, Southern has had great performances from the likes of Thomas, Morgan, Harris, Heckemeyer, Emily Presley, Melanie Bower, Eric Schott, Cody Vogt, Tyler Hovey, Desmond Williams, and Kennan Harris.

Having already won many events in PSU, the Lions head into the conference championship weekend with a boat load of confidence.