No expectations, no problem 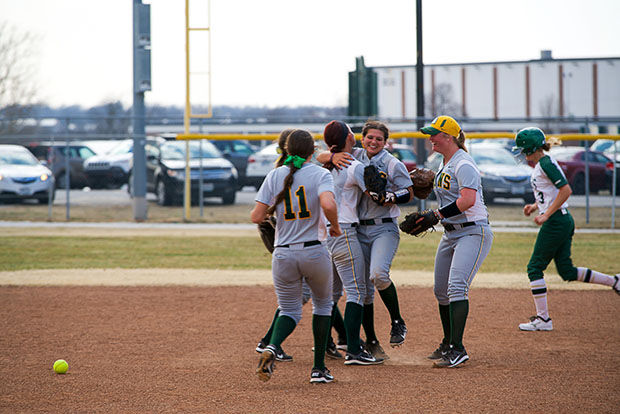 The Missouri Southern infield celebrating a win after closing out Missouri S&T in their 2016 home debut on Lea Kungle Field on Feb. 20, 2016. Southern swept the doubleheader against Missouri S&T and are 7-6 on the season. Southern has won five of their last seven games and will be hosting their annual Teri-Mathis Zenner Memorial beginning tomorrow at Lea Kungle Field.

Last season the Missouri Southern softball team didn’t notch their seventh win of the year until Mar. 27 against Washburn. That was seven weeks into the 2015 season. Now, they stand just three weeks into the 2016 season and they have already gotten seven wins.

That’s impressive considering the fact that Southern (7-6, 2-0 at home) doesn’t have an official head coach.

Interim head coach Melissa Chmielewski took over for former head coach Bill Gray on July 15 after his resignation on May 12. Chmielewski has stepped in and overhauled the culture that once existed in this softball program.

“She’s been the best coach I’ve ever had,” said freshman Ashley Caldarella. “I hope she stays for the next four years.”

“I feel so confident in the team this year just because we have her and the same goes for our assistant coach [Chelsea Erickson].”

“I think that the [upperclassmen] lost their confidence,” said Taurean Guzman, freshman. “They’d gotten used to losing. They didn’t know what winning felt like anymore.”

“We’ve gotten a taste of winning already this season, so after you get a taste of it, you want more,” said Caldarella. “Us freshman want to fight for our upperclassmen. I’ve never wanted to win so badly for our seniors.”

Chmielewski has already had a huge impact this team. She’s had an even greater impact on the freshman in a way that empowers chemistry, leadership, and confidence, something we haven’t seen from this softball program in years.

It’s translated on the field where the Lions swept the two-game series against Missouri S&T in the Lions’ home debut on Lea Kungle Field on Feb. 20.

“We have so much to prove and I think [playing at home] honestly, is our time to prove to everybody who doesn’t know how good we are,” said Caldarella.

The Lions will be back in action tomorrow as they play host to the Teri-Mathis Zenner Memorial Tournament on Lea Kungle Field. Southern will play against Sioux Falls at 2 p.m. and McKendree at 4 p.m.

“We’re all just excited,” said catcher Angel Badalamenti, freshman. “We have the opportunity to blow people away. Nobody expects anything from us. Nobody expect us to make a name for ourselves.”

“But we’ve come in with a new team chemistry, new coach, and new players. There’s a whole new dynamic to this team and we have the ability to be the talk of this conference.”