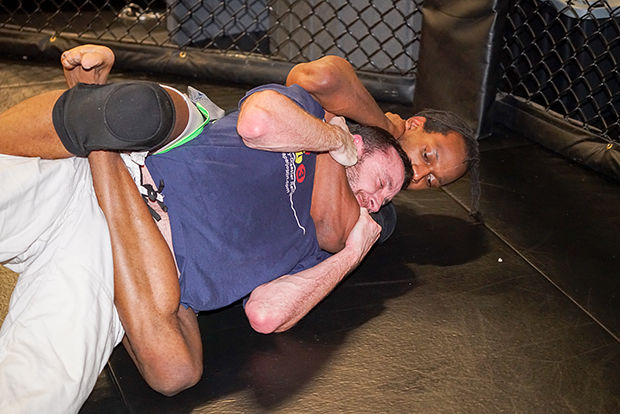 Former Southern basketball player Teejay Britton has traveled the world playing professional basketball. Britton turned down offeres from other countries to pursue mixed martail arts and cage fighting. Britton is a Youth Minister and the Director of an Alternative School. He’s also the director of Victory Gym & Fitness Center. The 34-year old from Poplar Bluff, Mo. is making his second professional fight on Mar. 19 at the Joplin Memorial Hall.

What makes a fighter? In many instances that definition seems to be different, but the argument could be made that there are certain relatable qualities. Still, “relatables” can be discussed until one is blue in the face, literally, before you truly find the answer to the original question.

For former Missouri Southern basketball player, and five year mixed martial artist Teejay Britton, the grooming for his career began early, dating back to his days growing up in Poplar Bluff, Mo.

“I was the baby of six … with three older brothers,” said Britton. “When we argued or would talk, my dad would always say, ‘well, go mix it up,’ and that’s what we done.”

Britton has long been known as an athlete, yet, aspirations of Division I basketball eluded him prior to finding his way to Southern.

As a Lion, Britton earned a number of MIAA accolades including Defensive Player of the Year as well as an All-Conference selection leading him to pursue professional options.

His career took him all around the world. He stopped for stints in Sweden, Australia and Chile, but no matter how much success comes his way, Britton always remembers what has got him to the position he is in.

“My dad worked two full time jobs,” said Britton. “Sometimes he would wake us up and say, ‘hey, you know where daddy is going?’ and we would be like, huh? And he would say, ‘I’m going to work to support you, because that is what men do.”

“He would always say ‘if you have family and you’re tough, you’ll make it,” Britton added.

Today fighting has become Britton’s life, but the path that brought him to his newest endeavor could only be characterized as divine intervention. From track to basketball and back again, Britton justifies his position by acknowledging the connections.

“Sometimes I forgot how much God has really blessed me,” said Britton, “how much success I’ve really had, because I’m not satisfied … God’s been good to me, man. That’s why I give it my all.”

Now, on March 19, 2016, Britton looks to take the second step in his newest profession.  That Saturday night at Memorial Hall in Joplin, the audience will see the display of a lifetime of work, an outpouring of talent and life lessons depicted in combative fashion.

That fact is something not lost on the fighter, youth minister and basketball coach, and amid all the blessings, one thought reins eternal.