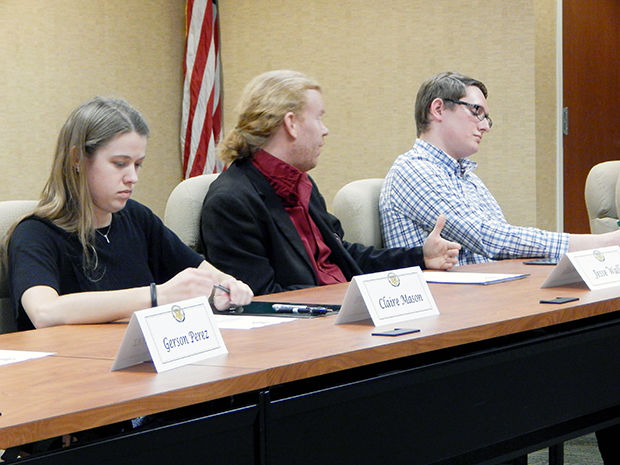 The first appropriation for the Southern Chamber Singers barely passed the two-thirds majority required for departmental groups with an 8-3 vote. The  Singers applied for the $1000 funding as part of the music department which already receives school funding and not as a registered student organization (RSO). The money will go to costs associated with a trip to Kansas City to perform at area high schools and colleges.

“Ultimately I wanted to clarify if the Senate can actually fund departments on campus,” said Jacob Layne, sophomore political science major. “That’s one of those things that’s always been a gray area for me.”

The second appropriation awarded the Math Club $1000 for travel expenses allowing the club to compete in the Collegiate Mathematics Competition at Missouri Western State University.

Senate President Kyle Prisock update the body on their first Presidents meeting which brought together heads of 12 RSOs on campus.  Reaction from Senators was mixed. Many indicated more advertising was needed for the event to let clubs know about the meeting in advance.

“It is something we hope we can grow,” said Prisock. “More people showed up than what I projected for the first meeting.

Dr. Michael Hulderman, Student Senate faculty advisor, updated the Senate on bills in the Missouri Legislature that would affect Southern and its students including one which would allow guns on campus.

“Some form of the bill is going to pass; I’m just not sure what its going to look like,” he said.” “Am I for conceal carry? Sure, but not necessarily for students on campus.

If we get a call about an ongoing incident on campus, not only will we have to deal with a suspect, but also with students which could lead to a cross-fire situation. Students can get angry sometimes, and if you have easy access to a weapon, that could be scary. I know some faculty that would scare me having a gun.”