Chicago is indeed the windiest of all the cities around 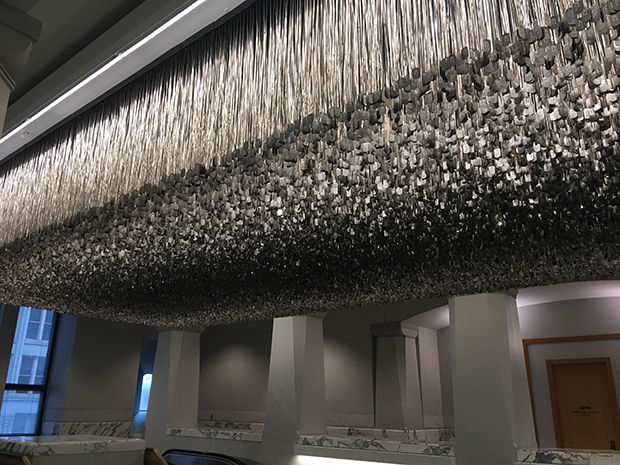 Dog tags are on display at Chicago Public Library. They are representative of deaths during the Vietnam War. The display is only one of two in the U.S. to list all lives lost during the war.

Chicago: The Windy City. Home of the Bulls and Blackhawks. Whatever you call it, that is where Ian and I went last week.

During our stay, we visited several places. If you’re in the northwest suburb of Elk Grove Village, I would recommend Coach’s Corner. A pretty neat sports bar with 20+ TVs for your sports indulging pleasure.

I recommend the chili con queso and a cold beer.

When we went downtown the next day, we visited the Museum of Contemporary Photography at Columbia College. This was a three-story collection of photos from all genres.

There were photos on display ranging from Jackie Kennedy at JFK’s funeral to a picture of youth at Mardi Gras in New Orleans.

Next stop was to Willis Tower (formerly known as Sears Tower) to check out Skydeck Chicago. If you haven’t seen the video, go to YouTube and check it out. For a mere $22 you can take an elevator 103 stories up, walk around and look out, or, step outside into a glass box and take in the view from three sides.

We visited the Chicago Library (mainly to get out of the snow) and were greeted by a display from the National Veterans Art Museum titled “Above and Beyond.”

“Above and Beyond” is a collection of 58,307 dog tags. These represent the deaths of military personnel during the Vietnam War. This display is the only memorial besides The Wall in D.C. to list all killed during Vietnam.

Millennium Park is home to a giant silver bean. According to the City of Chicago website, the work was created by a British artist Anish Kapoor, and this was his first public outdoor work installed in the U.S. It is a 110-ton elliptical sculpture of highly polished steel plates.

There is an arch in the middle so you can walk under and take goofy pictures. The bean measures 66-feet long and 33-feet high.

Across the street is the Art Institute of Chicago. On display was a Van Gogh exhibit.

Of the many pieces on display, my personal favorite was the self-portraits he did.

As Ian and I discussed on our walk back to the car, I enjoy self-portraits because we are our own worst critic. Other pictures or images we may have seen of Van Gogh probably looked nothing like the self-portrait.

And what trip to the Windy City would be complete without a visit to United Center. Yep, the Bulls were taking on the Wizards in that night’s contest.

We enjoyed the game and all manner of festivities between quarters and a kids talent contest at halftime. The only downer to United Center is $8.75 for a beer.

Although a short visit to Chicago, it was nice to get downtown and explore. The wall art along Michigan avenue and State street were cool to see.

If you get a chance, I recommend Chicago for a visit. If you have the option, opt for more than just one day in the city.