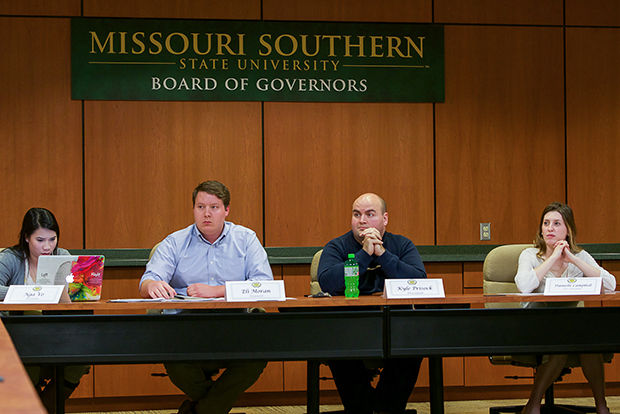 Missouri Southern’s Student Senate announced the resignation of Capitol Improvents Chairman Joshua Ferry during their meeting Wednesday. Ferry had only recently taken over the position on Feb. 17. 2016. The Senate will not fill Ferry’s seat for the remainder of the semester and Vice President Daniella Campbell (pictured on the far right) will take over chairperson duties for the remainder of the semester.

Ferry had served on the Committee since joining the Senate on Oct. 7, 2015, but had only recently taken over chairperson duties on Feb. 17, 2016.

“Josh was a great part of our executive board, and he will be missed, but we completely understand why he needed to step down,” said Student Senate Vice President Daniella Campbell, senior nursing major. “He was a team player and we appreciate all he did.”

The Senate will not fill Ferry’s seat, and Campbell will step in to fill his role as chairperson for the remainder of the semester.

In addition to the Ferry announcement, the Senate Finance Committee heard testimony from Missouri Southern’s English honor society, Sigma Tau Delta. Members of the group appeared before the committee requesting $1000 in appropriations funding to reimburse the club for costs associated with sending four members to the Sigma Tau Delta 2016 International Convention in Minneapolis, Minn. on March 2-5.

This year’s convention, with nearly 1,000 registrants, included submissions of 510 papers, 29 roundtables, and six special presentations. Over $14,000 was awarded in prizes for works presented at the convention.

“The conference lets our members practice what they will be doing in a non-academic setting and allows them to interact with their peers in the English profession,” said Sigma Tau Delta President Justin Culbertson, senior secondary education major. “It’s a good chance to network, but it’s also a reward for all the hard work that our members do and the effort they put in. I’m always encouraging people to enter and to go so they have that opportunity.

The entire Senate body will vote to approve the appropriation during next Wednesdays meeting. If approved, the funding will be deducted from the Senates current budget of $45,026.02.