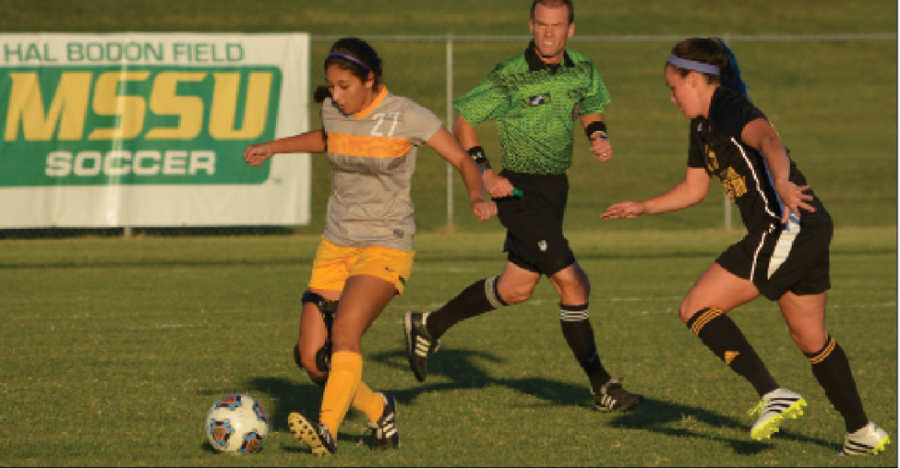 Freshman Brianna Valenica dribbling the ball against a Missouri Western defender on Hal Bodon Field against Mo. West on Sept. 29, 2016. Valencia has played in nine games this season for the Lions attempting two shots.

The Lions traveled for their first game of the weekend to Warrensburg, Mo. to face rival and nationally ranked, University of Central Missouri Jennies.

Central Mo. got on the board first scoring in the 23rd minute off a 10-yard goal from Courtney Killian. After hanging with the No. 4 ranked Jennies for the next 50 minutes, UCM would ice the game by adding another goal in the 86th minute. Another UCM goal with only five seconds remaining ended the game by a final score of, 3-0.

The Lions dropped their second game of the weekend 4-1 to Lindenwood. Sophomore Denine Tahbaz scored early for the Lions beating a charging Lindenwood goalie in the sixth minute off of a pass from freshman Tayler LePage. Lindenwood came back with a goal of their own in the 25th minute and took the lead in the 43rd minute when they another goal before halftime. Lindenwood added another pair of goals in the second half one in the 53rd minute and the final in the 74th minute. Final score, 4-1 Lindenwood.

Lindenwood ended up with an 18-8 shot advantage over the Lions, 8-6 in shots on goal. Tahbaz led Southern with four shots, all on goal, while junior Taylor Beck added two shots, one on goal. Freshman Ashton Denham added one shot on goal and sophomore Bailey North added a shot.

The Lions will return home Friday night at 6:00 p.m. as they host Southwest Baptist for senior night. This is the final home game of the season for the Lions  as they look to get win number three at home.