The wrong Lions made the comeback this time 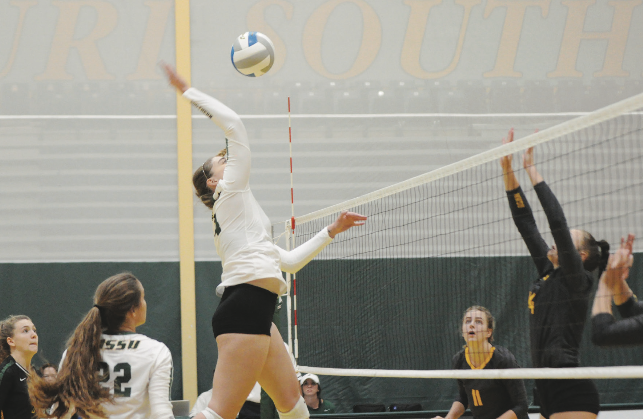 Junior Alicia Pickett swings her arm to hit the ball across the net against Missouri Western State University on Sept. 22, 2018, inside the Leggett & Platt Athletic Center.

The Missouri Southern volleyball team finished off last weekend with a devastating loss. In fact, it was the exact same kind of loss that they handed to Missouri Western the weekend before. A comeback loss. The Lions were leading Lindenwood 2 sets to none before allowing them to comeback and win.

Southern suffered a tough loss at the hand of the Lions of Lindenwood University. The Lions of MSSU got of to a great start with a convincing 25-15 victory in the first set. In set number two the Lions weren’t nearly as dominant but still pulled off a 27-25 victory.

As for the final three sets, the Lions would be dominated by the opposing Lions. The final score of set three was 25-14. The fourth set didn’t get any better either. Lindenwood topped Southern by the score of 25-11. In the fifth and final set the Lindenwood Lions would come out on top in convincing fashion once again, this time around it was 15-9.

The Lions were led by sophomore Janelle Brehm, and junior Bridgette Jaeger. Both players posted a double-double on Saturday. Jaeger led the team with 13 kills and added 10 digs. Brehm picked up 12 kills, and added 21 digs.

On Friday night last week the Lions played host to a tough Central Missouri team. The Jennies came into play ranked 17th in the nation. The Jennies would cruise to a victory with a sweep over the Lions. Set scores were 25-20, 25-21, and 25-11.

The Lions play host to the ninth ranked team inside all of Div. II volleyball tonight. Washburn university comes to Joplin ranked ninth, and undefeated. The Ichabods are looking at a 19-0 record tonight, and hope to make it 20-0. A gritty Lions team of late hope to spoil the Ichabods chances of making that happen. The Ichabods have only lost eight sets all season long. They have also not played in a single game that went to a full five sets, meaning they’ve never lost more than one set in a game. They handed the fourth ranked Nebraska-Kearney team their only loss on the season so far.

On Saturday the Lions host 8-12 Emporia State. ESU is also 2-5 in conference play right now. Their record is going to change prior to Saturday’s game, as they head to Bolivar, Missouri to face Southwest Baptist University.