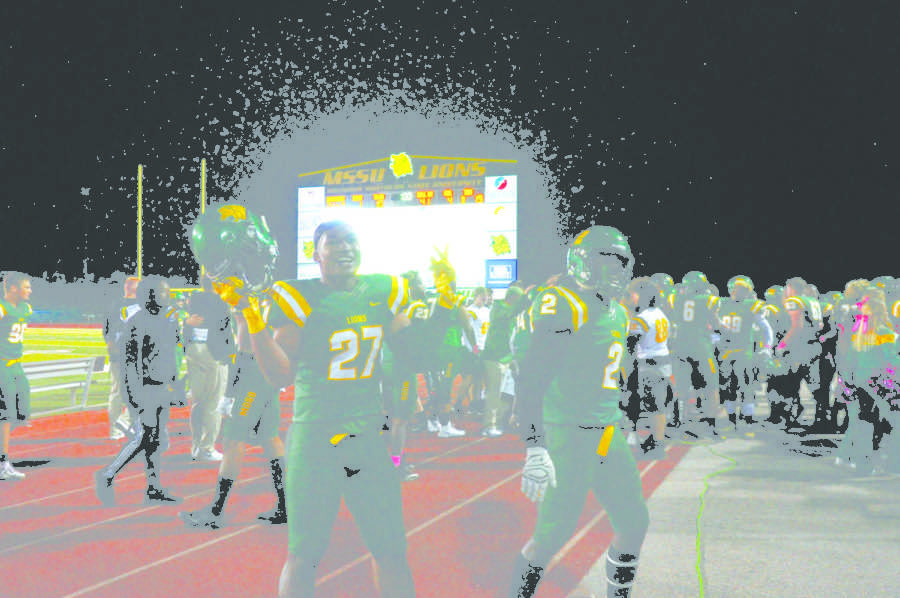 Junior Justin Legier (27) celebrates the 24-19 victory over the Northeastern State Riverhawks with Deshon Cowling (2), junior,  and the rest of the team in Fred G. Hughes stadium on Saturday, Oct. 20, in Joplin, Mo. Legier has led the Lions in tackling this season with 70 total, Cowling is third on the team in tackles with 54.Elaine Parrigon | The Chart

It had been nearly two years since the Missouri Southern football team had won a game. The Lions beat the Northeastern State Riverhawks 24-19 on October 20 to snap a 20 game losing streak. The 20 game losing streak stretches all the way back to Nov. 5 of 2016 when the Lions lost to the Lindenwood Lions. The game prior to that the Lions beat the same Riverhawks team before going on the losing streak. The 24-19 victory this year for the Lions did not come easy with the game coming down to the final couple of drives. The Lions held the Riverhawks out of the end zone for their last two drives of which one came from a goal line stand. The play of the defense allowed the offense to get into victory formation for the first time in 20 games.

The Lions would lose their next game against the University of Central Oklahoma the following week.

Despite the loss, the team was still happy to get the monkey off their back and this win felt different than others in the past especially to junior, Mike Dzierzga an offensive lineman for the Lions.

“We haven’t won in so long so it felt good to celebrate with the coaches and teammates. Winning this one is making us hungry for more,” said Dzierzga. “We know that if we’re capable of getting one win we can build off of that and continue moving forward. We have to keep getting better week by week because in the MIAA you have to go earn your wins, nothing is handed by anybody.”

According to the interim head coach Joe Bettasso there was nothing special said in the locker room, no magical speeches, just a team who was eager to win going out and doing their jobs to secure the victory.

“I think we got a sense at half time and we saw that we got to 14-6, and it was just one of those things when we had to win the football game and we had to guard against some scoreboard watching,” said Bettasso. “We finally had an opportunity to win a game and it could get tight, so we had to preach not to look at scoreboard and lets just execute. I think moving forward we don’t have to worry about the monkey off your back and we can just play football and give us an opportunity and be in some close games going forward.”

The fans here at Missouri Southern have also been pleased with the recent win for the Missouri Southern football team according to the Lions sophomore running back, Dalton James, who had 138 yards rushing and a touchdown in the victory over NSU. He said that one of his teammates got a standing ovation in one of their classes.

“Everyone is a little happier around campus or at least everyone I have encountered on campus has been happier and people are just a little bit more energetic around campus after the win,” said James.

The Lions team had only a week of glory before losing to UCO, but the game against NSU gives the team hope moving forward for not only this year, but the next as they look to improve.