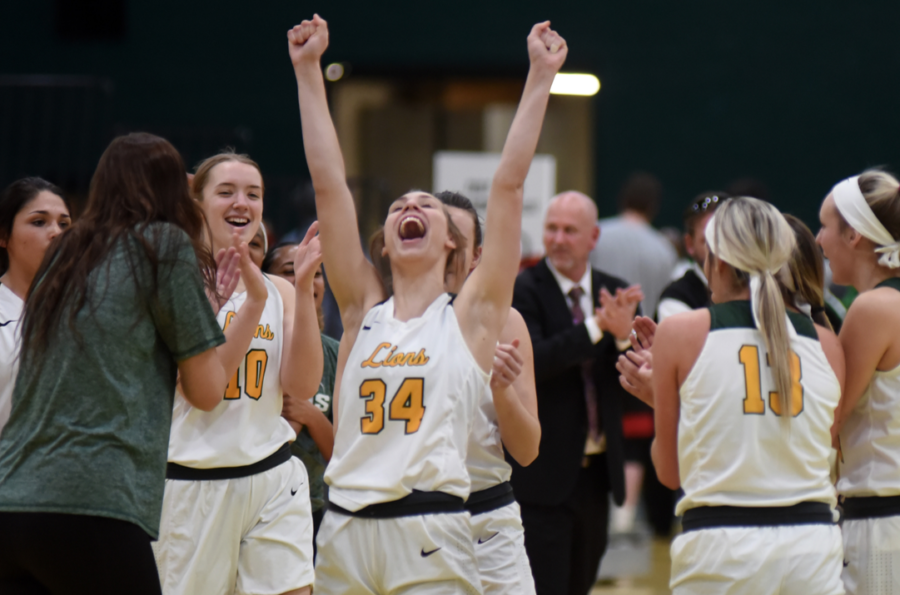 Krista Clark (34) celebrates with team after win against Pitt State on Feb. 19

The Lions took on their rival Pittsburg State University on Saturday, Feb. 16, for the first of two games.

The Lions were unable to score during the early part of the game. The Lions and Gorillas continued to trade buckets going into the second quarter.

Pitt State held the largest lead of the half while just being up 11-5. Going into halftime the Lions were down by one after senior Chelsea Henry got fouled on a layup and the bucket counted along with a free throw. Lions would trail the Gorillas 29-30 going into halftime.

The Lions fell short to the Gorillas 78-6, while the Lion’s top scorer junior Chasidee Owens gave the lions 17 points and Henry added 16 points of her own during the loss..

“The biggest thing we’ll have to do is play for 40 minutes and guard their three point shooters better,” said Head Coach Ronnie Ressel. “The first half we did a great job, and in the second half we didn’t get to them and they ended up going 6-9 from three.”

The Lions turned around and played the Gorillas again on Tuesday, Feb. 19 inside Leggett & Platt Arena.

Southern started off with a 7-3 lead half way through the first quarter, led by a jump shot by Henry.

Pitt State fought back with a three from senior Shelby Lopez and a couple lay ups to put the Gorillas up by one.

A pair of threes from sophomore Krista Clark and junior Destiny Cozart put the Lions up 19-16 after the first quarter.

PSU came out strong in the second quarter of play going up by three leading 22-19, but Owens gave the Lions five quick points to put the Lions up by two.

Inside of four minutes to play, the Lions hit three shots from behind the arc to go up 39-26 while going on a 19-4 run. Going into halftime the Lions were up 43-28.

The Lions continued to score the ball with a three-point play by Henry, and two three-pointers by freshman Layne Skiles to put the Lions up 69-48.

A layup by Owens gave the Lions a 22 point lead half way through the fourth, and then the Lions would continue to out play the Gorillas to end the game. The Lions had 15 offensive rebounds which led to 18 second chance points.

Senior night ended the right way for Southern seniors Henry and Laura Assena sending them off their home court with a win. The final score was 77-63 in favor of the Lions.

The Lions next game will take place at 5 p.m., Saturday, Feb. 23, at Emporia State University in Emporia, Kansas.