MSSU preps for PSU in quarterfinals of MIAA tourney 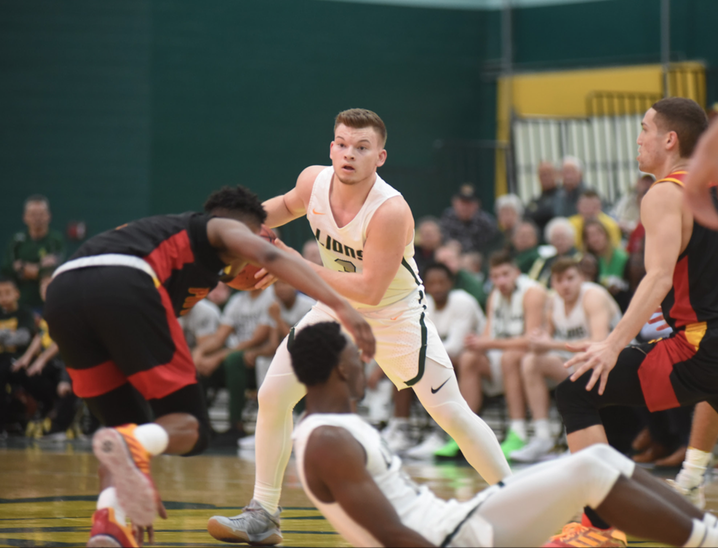 Parker Jennings looks to get past Gorrila defender on Feb.19

The 23rd ranked Missouri Southern Lions finished their season with a matchup against the University of Nebraksa-Kearney after dropping a game against Fort Hays State University 89-84.

Jennings was also able to get three assists and one steal to add one to his night. This is the eighth different Lion this year to score more than 20 points in a game.

“I know I can play like that,” Jennings said. “I’ve shown it before and I know I can shoot the ball at a high clip.

“My teammates did a great job of finding me and I got hot in the first half it carried over into the second half.”

The Lions had other productive players in the game against the Lopers as junior Braelon Walker scored 17 points, had three assists and four rebounds.

Junior Elijah Clark was two rebounds away from a double double with eight rebounds and 15 points. Teammate sophomore Cam Martin got his 17th double double in 28 games and is tied for fourth in the nation among Division II players. He ended the game with 13 points and rebounds.

The Lions shot nearly 57 percent from the field while holding the Lopers to under 40 percent. The Lions also scored 44 bench points and had 19 second chance points off of 10 offensive rebounds to beat the Lopers 104-67 to claim the third seed in the MIAA tournament.

The Lions finished the season 23-6 which is the Lions best record since the 2013-14 season. The Lions went undefeated at home while 8-5 on the road and 2-1 at neutral locations before entering the MIAA tournament.

“Going into the tournament we’re looking to win the tournament and nothing less,” Jennings said. “We’ve worked our butts off to get where we are and we need to finish strong to get a good bid for the NCAA tournament.”

The Lions had three other players get all MIAA honors with Clark getting second team, while Lambert and Walker got honorable mentions.

The Lions were originally picked to win the MIAA in a coaches poll and were picked to finish second in the media poll back in October 2018.

“When we play how we are capable of playing we think we are not only the best team in the MiAA, but all of D-2,” said Martin on the Lions chances to win the MIAA.

The third seed Lions will face the sixth seed Pittsburg State Gorillas for the third time this season.

The Lions swept the Gorillas this season with the most recent win being at the Leggett and Platt Athletic Center where the Lions won 94-81 led by a 21-point outing by Martin.

In the two games against the Gorillas this season, the Lions shot nearly 50 percent from the field while holding the Gorillas to under 45 percent.

The third seed Lions will take on the sixth seed Gorillas, 2:15 p.m. Friday, March 8, at the historic Municipal Auditorium in Kansas City, in MIAA Quarterfinals.