From ‘kidlet’ to graduate 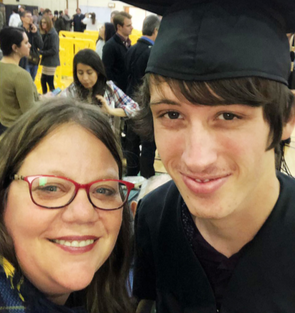 By Trey Vaughan Special to the Chart

Three advisors in as many years.

And it will become four in the fourth year.

That’s a recipe for disaster.

But thanks to three wonderful people and some hard working and dedicated students over the years The Chart has handled it about as well as they could have.

So here we (The Chart staff) are again thanking a very special person once again as they walk out the door.

And they aren’t walking out the door by choice.

Kaylea M. Hutson-Miller has come in as the new advisor and done nothing but great things. She has helped her students, she has taught, and pushed them into great journalists, designers, and more.

Kaylea is not new to the Chart itself. She was the Editor-in-Chief as a student. She was fit for this role and she truly cared about this job and her students.

Kaylea already had prior concerns with The Grove Sun and The Delaware County Journal. Yet she found time to fit in this job and now it’s been taken.

If nothing else, she gets the utmost respect from me for dedicating her time and energy into a job that was taken from her after just one year. A job that she would have devoted much more time and effort into if given the chance.

But I could say the same for the past advisors since I’ve been a part of the Chart.

Kaylea wasn’t exactly a teacher for me simply due to my area being sports and the fact that I was only going to be around for a semester.

Kaylea did something for me that will never ever escape me.

She gave me something that I will never relive.

I wrote the story for the FLW tournament that stopped at Grand Lake in late March for the Grove Sun.

I wrote my first article for an actual publication outside of the campus newspaper.

She gave me an opportunity to step towards my dream of sports writing professionally.

Kaylea you will never know how much that meant to me to do that.

I thank you for impacting my life forever.

From stealing page 10 from me to fulfilling a dream, you’ve been a great advisor this year.

The shoes needed to be filled have been large each of the past two years, in my personal opinion they were filled well, but they aren’t getting any smaller. And it won’t be easy to continue bouncing through advisors year after year.