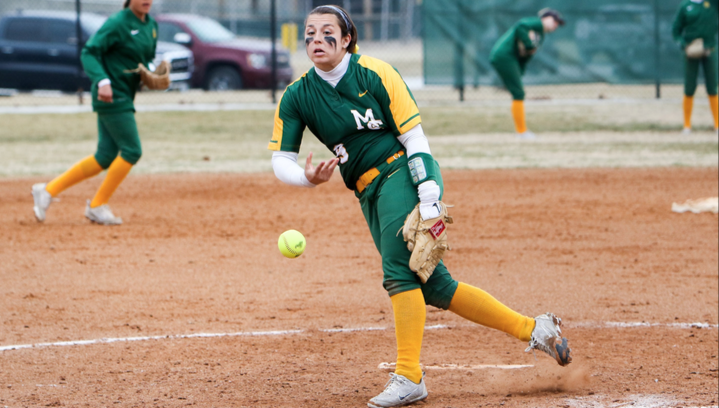 Taurean Guzman throws a pitch during a Lions softball game.

Lion senior Taurean Guzman has been a large part in the successes of Missouri Southern’s softball program.

Guzman comes from Spring Hill, Kansas. She began playing competitively in the eighth grade and always knew she wanted to play in the collegiate level.

Guzman was originally recruited out of a St. Louis exposure tournament that brought her to Missouri Southern.

This season Guzman is leading the Lions in wins as the Lions are just below .500 and are looking to have a winning season for the first time since 2013.

“Taurean has really evolved into our ace on the team. She is a bulldog on the mound. I can put her up against anybody, she is resilient. She has great control of her pitches,” said head coach Hallie Blackney.

Guzman, on top of being one the Lions top players this season, has fought anxiety.

Anxiety and depression is something that is very important to Guzman as her close friends and family members have issues with both areas.

“I’ve always been uptight, but I didn’t really understand how much it affected me until my sophomore year of college,” said Guzman.

Guzman’s anxiety comes out in many areas of her life including when it comes to playing collegiate softball.

“There was a day where we had conditioning, I had a rough day and nothing really went wrong that day. I am in really good shape, but the band was playing right next to us,” Guzman said. “The drums started playing really fast and it got into my head.

“All I could hear was the drums and the tempo made my heart speed up and it made me kind of have a small panic attack. I still finished, but it was the overwhelming sound that really affects me somedays.”

Although Guzman said playing softball for the Lions helped with her anxiety, she credits her love for writing and poetry as a big part for her managing her stress.

Guzman has had multiple poems published including several in Missouri Southern’s Bordertown a student publication which features writing and poetry.

“I use to actually hate poetry, but I read that book Milk and Honey and I really liked that style of writing so I just built off that and I just really like the different variations of poetry,” said Guzman.

Guzman poetry is mostly about her experiences with anxiety. She also talks about depression.

“I feel like its hard for people to understand unless your going through it,” she said. “Some people think your just worried about something and that they just need to relax.

“People find themselves worried about things that don’t really matter, but its just like a constant nagging and you don’t really realize its happening.”

Blackney is aware of the anxiety Guzman has and is a big supporter of her writing. She owns an autographed book that has some of Guzman’s writings.

Blackney credits Guzman for not being an outstanding student athlete, but being a very talented writer.

Guzman will continue to finish her senior year of softball as she finishes her schooling to become a middle school teacher.

She wants those with anxiety to know that people do care and that the person in their mind isn’t always right.