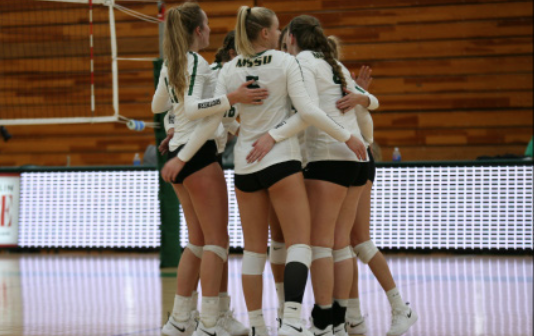 Southern huddling up after scoring against the College of the Ozarks on Sep. 24

On Friday Southern visited Newman Uni- versity (0-10, 0-1 MIAA) in Wichita, Kansas for an MIAA match. The Lions were victorious in four sets with scores of 20-25, 25-19, 25-13, and 25-22. Everyone was involved for the Lions as junior Morgan Nash picked up 16 kills and nine digs, junior Janelle Brehm had nine kills and 15 digs, senior Alicia Pickett had seven kills, junior Alyssa Diaz had eight kills, and freshman Makenzie Fa’amausili-Cacoulidis dished out 34 assists and added seven digs of her own.

On Tuesday evening. the Lions had another strong performance in a nonconference matchup against visiting College of the Ozarks. The Lions won in three sets with scores of 26-24, 25-18, and 25-16. Nash had 15 kills and sophomore Shaylon Sharp had 11. Diaz had six kills and three blocks. Fa’amausili Cacoulidis had four kills, 39 assists, and nine digs. Sophomore CC Pollard led in digs with 18 digs. Brehm contributed seven kills and nine digs.

These matches wrapped up a strong week for the lions, rais- ing their record to 8-4 with one win and win loss in MIAA play so for this season.

The Lions play at home against MIAA opponents on both Friday and Saturday. On Friday at 6 p.m., they will take on University of Central Missouri Mules. On Saturday at 1 p.m., they host Northwest Missouri State University .